One of only three sites in the world capable of producing 120m rails for the railway industry. 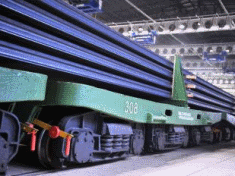 To date, the rolling mill in ArcelorMittal’s Dąbrowa Górnicza site has been producing 30m rails. With the production of 120m rails, this US$46m project will contribute to the modernisation of railway infrastructure around Europe.

“The production of long rails is a project of significant strategic importance for us, considering the plans for rail investment in many countries, including Poland. We are pleased that the opening of the installation has taken place just days before the tenth anniversary of our presence in the Polish market. In the past decade, ArcelorMittal has invested more than US$1.6bn in the modernisation of its plants in Poland” said Manfred Van Vlierberghe, CEO of ArcelorMittal Poland.

The new installation comes as ArcelorMittal Europe has this month been selected by Deutsche Bahn after winning an open tender, to supply 129,000 tonnes of rails to the German railway company in 2014, together with ArcelorMittal’s Gijón site in Spain.

"We are very pleased to be working with Deutsche Bahn on this project, which comes just after we have completed a major investment in our rail production facilities in Poland, enabling us to produce rails of 120m", said Augustine Kochuparampil, CEO for long products at ArcelorMittal Europe.

Dr. Bernd Striegel, head of procurement and sites at DB Netz AG said: "Deutsche Bahn invests extensively in its railway network every year. In 2014, we aim to renew more than 3,000km of rails, 2,350 track switches, more than two million railway sleepers and about four million tonnes of gravel. In order to perform these construction projects with high quality and reliability, we need reliable partners such as ArcelorMittal, with whom we have been working successfully for years."