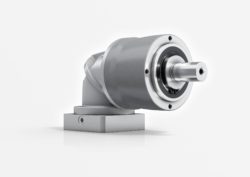 A new CP series belonging to the alpha Basic Line and space optimized right-angle stages – now also for the NP series in the alpha Value Line – round off the portfolio of WITTENSTEIN alpha GmbH. The stylish bevel gear stage, designed for use in tight mounting situations, impresses with compactness and high efficiency. The new CP series in the alpha Basic Line achieve accuracy of ≤ 12 arcmin – with right-angle stages that are specified with ≤ 17 arcmin depending on the size.

Owing to the market-compatible output interfaces, the extensive range of possible coaxial and right-angle versions is suitable not only for rack-and-pinion systems but also for spindle and chain drives as well as coupling connections. The large number of variants which are available for the CP and NP series leaves nothing to be desired when it comes to commercially sensitive applications with mid-range performance requirements in the General segment – the output diversity goes far beyond the current market standard, with countless benefits for users.

The chief design highlight of the right-angle versions in the alpha Basic and alpha Value Lines is the high power density which is achieved in a much smaller space – making them ideal for use in tight mounting situations. The permissible maximum speed has simultaneously been improved on the input side. The harmonious operating noise of all gearboxes over the entire rpm range testifies to the high quality of the components and their interaction during torque or speed conversion.

New variants have likewise been developed in the CPS series, on the one hand with a replaceable B5 output flange and on the other with a long centering component – the only one of its kind in the market. © WITTENSTEIN SE

The new product generation of planetary and right-angle gearboxes in the alpha Basic Line is designed to provide solutions which are as cost-effective as possible for standard applications. The new generation of the CP series – with five different sizes, additional output variants and new bevel gear stages – combines ≤ 12 arcmin of torsional backlash in the coaxial version or 17 arcmin in the right-angle version with high application flexibility. New variants have likewise been developed in the CPS series, on the one hand with a replaceable B5 output flange and on the other with a long centering component – the only one of its kind in the market.

The long centering option enables an even more compact connection between the new interface and the machine and simultaneously saves valuable space. The replaceable B5 output flange provides more design freedom and can be flexibly adapted to the application interfaces. This combination of performance characteristics predestines the alpha Basic Line for feed axes for handling kinematics in the packaging industry as well as for belt drives, positioning axes on delta robots and machine tools with short, linear spindle motions.

Absolutely precise positioning, maximum configuring flexibility and economic efficiency – these features all help the modular NP gearbox series in the alpha Value Line deliver optimal performance in the most diverse axes and applications. Five different coaxial gearbox variants are available – each of which can now also be supplied with the new right-angle stages. With umpteen possible reduction ratios from i=3 to i=100 and multiple interfaces to the motor and the application, they can be individually adapted to each customer’s specific requirements. The performance range for which the alpha Value Line was designed is characterized by torsional backlash of ≤ 8 arcmin – or ≤ 15 arcmin in the right-angle version – together with precision, dynamics and power density oriented to the application and freedom from maintenance throughout the lifetime of the equipment. Various product versions – for example with couplings or as a complete linear system – expand the solution space for these “individual talents”.