Researchers at Fraunhofer have recently created sensors made from Silicone

Silicone is so soft and flexible that it is easily deformed by the pressure of a finger. Researchers at Fraunhofer have recently created sensors made from this flexible material, making it easier to steplessly control devices. 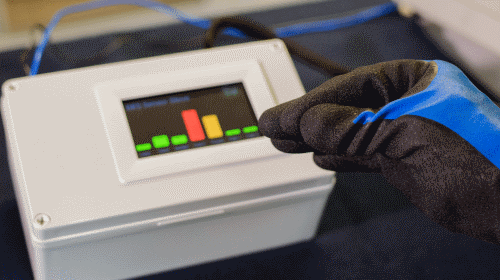 Multifunction steering wheels are standard in most automobiles today, and these days drivers can easily manipulate the cruise control and stereo without taking their hands of the wheel. However, the buttons are rather inflexible and the driver can often only switch something “on” and “off” or can only choose the “next” or “previous” song.

“That is because they are made of rigid materials like hard plastic, metal or ceramics,” explains Dr. Holger Böse, technical and scientific manager of the Center Smart Materials (CeSMa) at the Fraunhofer Institute for Silicate Research ISC in Würzburg, Germany. In his work, Böse focuses on smart materials with mechanical features that can be controlled either electrically or magnetically.

These novel sensors invented at ISC can send out electrical impulses to control things. They have therefore been designed like an electrical capacitor – two electrode layers consisting of a conductive silicone above and below and one insulating film layer in between. However, if you press on the capacitor nothing happens at first.

“The electrical capacitance – the electrical charge divided by the voltage applied – is the decisive factor. However, in a conventional capacitor structure the pressure effect is so small that it can barely be measured let alone be used for control purposes,”Böse explains.

In order for the pressure to have an effect, the researchers applied additional layers of silicone on the film. Thus, for example, two more films press from above and below to put additional pressure on the film in the middle. The two films are not smooth but have a special pattern that was added by the researchers. Through their special capacitor design, the researchers were able to use a physical property of silicone, which so far has only been observed when stretching a silicone film coated with layers of electrodes – its geometry changes; the surface becomes larger and the silicone layer becomes thinner. The result is that the electrical capacitance increases. “We transferred it from tensile forces to compression forces,” explains Böse. 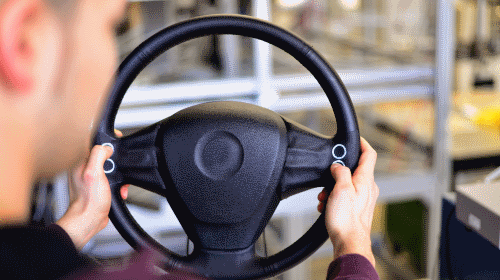 How the compression force acts strongly depends on how the pattern is applied to the film and how the electrodes are attached. The sensor‘s electrical capacitance is different in each case. The researchers can use these differences and adapt the design of the sensors individually to different geometries and sensitivities. The scientists apply industrial intermediate silicone products or use their own formula. “Our chemical department can develop customized silicone for the sensors based on the customers‘ needs. We can vary the chemical composition and technical shape of the sensors depending on the properties required,” says Böse.

Sponsored by the Bavarian Ministry of Economics

The pressure sensors were developed within a funding program of the Bavarian Ministry of Economics to develop „smart materials“ and bring them into application. The project is now in its seventh year and will end in 2016. “At conferences, the response of the automotive industry for the new technology was very positive,” Böse relates. “Now we have to get the technology out of the lab and adapt it to various applications. In a couple of years there could be various concrete products.”

Because the sensors are soft and flexible, they can be integrated into all kinds of environments. “The applications are almost infinite,” says Böse. For example in cars, control elements can be applied to steering wheels, central consoles, window openers or in seats. They can replace old rigid buttons or be put somewhere else, such as in the car‘s ceiling or in the door panels.