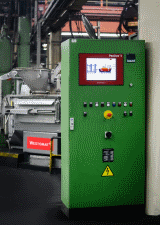 Dosing furnace tuning at Ford: relining and upgrading to ProDos 3 control make this Westomat state of the art too © StrikoWestofen Group

Turning something old into something that’s as good as new: to adapt productivity, availability and energy consumption to meet the latest standards, the Ford factory in Cologne (Germany) recently modernized further production units. Here they once again relied on the competence of manufacturer StrikoWestofen (Gummersbach). Successful conversion to ProDos 3 controls as well as speedy relining in the previous year were convincing for the Ford factory, so that further systems soon followed.

After two years of reliable operation, the Ford factory (Cologne) still saw a lot of potential in its Westomat dosing furnaces. For this reason, it has now had another half dozen of them overhauled. Convinced of the quality of the existing systems and the successful modernization carried out in the previous years, Ford once again relied on the know-how of the furnace manufacturer StrikoWestofen.

The made-to-measure project served to improve dosing accuracy, energy consumption and system availability. “Thanks to the rapid completion of the work, we had practically no production downtime,” is the positive conclusion drawn by Klaus Herweg, who is in charge of maintenance at the Ford die-casting plant in Cologne.

The replacement of the old Westronics control by the new ProDos 3 was the first step towards increasing productivity: using constant analysis of the process flows, the intelligent ProDos 3 precisely adapts the dosing procedure of the Westomat to the production cycle in each case.

That way, it increases dosing accuracy by up to 35 percent, making an important contribution to return reduction - and it is easier to operate, too. “Over the last three years, we have had seven of our dosing furnaces converted,” Herweg explains. “We also installed an additional new system as part of the general overhaul of a die-casting machine.”

Depending on maintenance and use of the Westomat, relining is unavoidable sooner or later. As a special service, StrikoWestofen offers three alternatives – depending on the downtime the customer can cope with. The first one is relining on the supplier’s premises, which takes about 4 to 5 weeks including transport to the factory and back.

A more time-saving option is removal in situ followed by insertion of a pre-sintered relined replacement part. Here, only 5 working days of downtime need to be scheduled – heating-up phase included. Thirdly, when time is of the essence, a relined replacement furnace body can be recommended. Even with the heating-up phase, this alternative requires no more than 3 working days downtime.

Ford decided to have relining carried out directly on the StrikoWestofen premises. Delivery with a completely dried new lining ensures rapid commissioning of the dosing furnace and makes rinsing batches unnecessary when it is taken into operation.

For one furnace, the customer decided to have a complete replacement furnace body delivered, allowing especially rapid recommissioning. Once the relining has been completed, even the oldies among the Westomat furnaces easily match the performance of the youngsters: modern insulation materials allow them to keep up with comparable new systems in terms of energy consumption. The costs are recovered within months.

Manufacturer StrikoWestofen offers a number of made-to-measure modernization concepts – from relining only to complete modernization including control, switching system, pneumatics, sensors and cabling. It is also possible to retrofit many of the new options presented in the last few years into existing systems: such as riser tube edge cleaning, a self-cleaning transfer launder, a flanged riser tube, biscuit correction, increased dosing accuracy, Webserver 4.0 and others.

“Conversion to ProDos 3 as well as relining are worthwhile investments. This is why Ford is going ahead with modernization,” says Herweg confidently, adding: “New is not necessarily better, after all!”