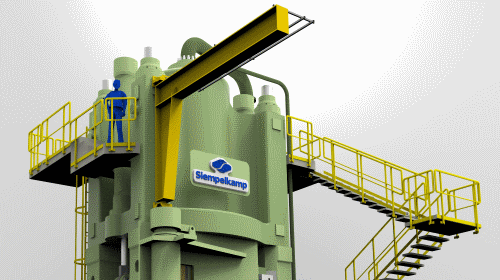 In May, ThyssenKrupp Rothe Erde GmbH, the leading global manufacturer of slewing bearings and one of the largest producers of seamless rolled rings, placed an order with Siempelkamp for the supply of a new 6,000 ton (≈ 60 MN) upsetting and piercing press to be installed at their Dortmund, Germany, works for the manufacture of ring blanks. A convincing feature of the Siempelkamp press was the high degree of automation, a guarantee for highly efficient production.

ThyssenKrupp Rothe Erde GmbH ordered the new upsetting and piercing press as a replacement for an older 4,000 ton press. The new press will produce ring blanks with weights between 400 kg and 25 ton, in diameters of up to 2,500 mm and heights of up to 830 mm . The press will produce ring banks for an existing ring rolling mill. The higher press force capacity will allow for the production of larger ring blanks of higher-strength materials in the future.

Siempelkamp will supply the complete press solution including all peripheral components. The slug and the scale will be automatically removed, additionally previous manual functions such as placing of charcoal and the removal of scale from the lower shifting table are no longer needed. The press will boast an overall high degree of automation.

The press will feature two swivel arms equipped with hydraulically actuated removal devices. Thus it will be no longer necessary to use fluxes, such as charcoal. Consequently, there will be no undesired carburization of the pressed parts and dust emissions at the press will be minimized.

The order scope also includes the supply of service cranes for changing the press punch and the integration of a robotic manipulator into the control system. The manipulator will be used to load the ingots into to the press. Also the cooling and lubrication system for the pre-punching tool are part of the supply package.

Samiron Mondal, Managing Director of Siempelkamp Maschinen- und Anlagenbau GmbH responsible for the area of Metal Forming, is pleased about this role reversal: “ThyssenKrupp Rothe Erde GmbH has been our ring supplier for many years. Now, the Dortmund-based company for the first time relies on our expertise as plant builders and has become our customer. The high degree of automation of our press concept was one of the convincing aspects in this project.”

The new upsetting and piercing press will come with the Prod-IQ® software, an intelligent control solution that allows production data management and quality management to be designed in a most effective way. Additionally “DAHMOS” Data Acquisition Handling and Monitoring System developed by Siempelkamp will be integrated into the new press. This data base system has been designed to provide targeted process analyses taking into account all process-relevant parameters and allowing for early and precise detection of problems and weak points.

After the order placement in May 2016, the next step on the agenda of the Siempelkamp team will be the delivery and assembly of the equipment in the summer and autumn of 2017. The press is scheduled to be operational by January 2018.