25 years of excellence in casting simulation

Topic of the month

Casting process modeling has come a long way since the early 1980s when the casting designer using simulation was limited to deciphering a full casting through primitive two-dimensional sections. In the early days, the focus was on the simple quest of identifying hot spots in the casting. As Computer-Aided Design (CAD) and numerical simulation software packages evolved, the foundry engineer became able to make quick changes to the feeding design, fixing potential defects with relative ease.

Today, ESI's ProCAST allows for a full coupling of thermal-flow-stress analyses and evaluations of all casting processes, for all castable alloys, including defect detection, residual stresses, part distortion, microstructure and mechanical properties prediction. The solution also addresses other casting-relevant manufacturing processes such as core blowing and heat treatment.

First released in 1990, it just keeps getting better

ProCAST is considered the most powerful, comprehensive and accurate casting simulation solution in the industry today. Not only are its first users, who embraced ProCAST at its inception, still valued customers today - like General Electric, PCC Airfoils, Rolls Royce, Amcast Automotive (now General Aluminum) and Howmet (now a division of Alcoa) - nearly 1000 more have adopted ProCAST since then!

In 1990, one of the first customers to adopt ProCAST was the USA-based PCC Airfoils LLC, a producer of high-precision investment casting parts for turbine engines primarily for aircraft and power generation. Kathy Bell, Simulation Engineering Manager, was an early adopter of casting simulation and selected ProCAST as PCC's primary casting analysis tool. 25 years later, she is certain this was and continues to be the right choice: "PCC Airfoils has experienced numerous direct benefits from the use of ESI's ProCAST, such as resolving defects in production parts, and decreasing time and dollars for new part introductions. One of the largest benefits has been the reputation we've developed with our customers as being a leader in the use of simulation technology."

Inseparably linked to the development of ESI's ProCAST is software founder Dr. Mark Samonds. During the late 1980s, Mark started the development of ProCAST at the Processing Sciences Division of UES Inc. Like many high tech startups at the time, ProCAST originated in Dr. Samonds' basement. In the next three years, Mark's basement operation, joined by 4 other colleagues, quickly developed a global footprint. One of ProCAST's major milestones included adding dedicated modules to address a variety of physics involved in the casting process. Key fundamental additions in the 1990s included radiation, stress analysis, deterministic micro-modeling and grain structure. These developments were considered forward thinking at the time and remain unique functionalities today. 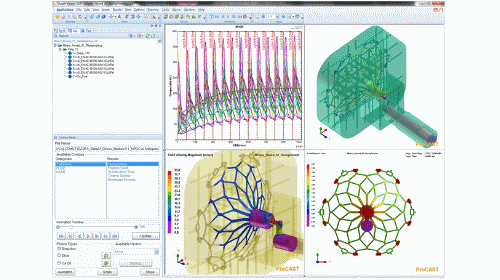 In 1994, UES Inc. signed an agreement with Calcom SA Lausanne, the developers of casting simulation software Calcosoft, for the exclusive distribution of ProCAST in Europe. Calcom went much further than distribute the software and teamed with EPFL (Swiss Federal Institute of Technology), taking part in international, European and Swiss research projects all aimed at bridging the gap between macroscopic entities and metallurgical aspects occurring during solidification. This collaboration resulted in the creation of two new ProCAST modules including the CAFE (Cellular Automaton and Finite Elements) module for the prediction of grain structures.

Over 100 dedicated casting employees in 40 countries

In December 2002, ESI Group acquired ProCAST and Calcom SA. This was a perfect fit as ESI Group is a world-leading provider of Virtual Prototyping solutions for the most challenging product development and manufacturing applications. The acquisition quickly accelerated the expansion of the ProCAST brand name and team, now encompassing over 100 dedicated casting employees in 40 countries.

This partnership integrates casting process modeling into the manufacturing process and lifecycle history so that customers can make the right decisions throughout the product development cycle. Kathy Bell from PCC states: "We enjoy an open line of communication and work with ESI as partners in our effort to have a useful, accurate, and dependable tool in our analytical toolbox. This helps us better simulate and analyze the physics needed to produce cast shapes of ever-increasing complexity”.

Taking advantage of more powerful, faster computers, ESI’s ProCAST analyses can span across multiple cores, processors and even computers, cutting weeks and days of simulation time down to hours and minutes. In 2012, ProCAST migrated to ESI’s Visual-Environment, with its state of the art graphical user interface. Dr. Antton Melendez, a ProCAST user for over 20 years who now acts as Foundry and Steelmaking Project Manager at Technalia in Spain, notes that of all of the developments in the last two decades, one of the biggest and most beneficial improvements has been the move to Visual-Environment. The platform enables users to gain efficiency by enjoying a common platform for all their CAE needs from pre- to post-treatment, meshing and results visualization.

Loic Calba, Product Manager of Casting Solutions at ESI Group, believes casting process modeling will continue to evolve in the next 25 years: “We passionately work to enhance the physics in our product, extending its functionality, quality and performance. One major topic for the future is a closer interaction with CAD: the current launch of integrated optimization and design tools is an initial step.”

In 2006, ESI’s ProCAST received the Frost & Sullivan Technology Leadership Award in digital simulation for its contribution to streamlining casting process design. Humbled by this recognition for excellence, ESI’s focus remains steadfast: helping each and every customer create unparalleled products. If you have flown in a jet, driven a car, heated your home, washed your hands or even spent a lazy Sunday watching motorsports, then you have probably benefitted from a quality product engineered with the help of ESI’s ProCAST.