Markets for Steel and Aluminium Scrap

The Phoenix from the Melt 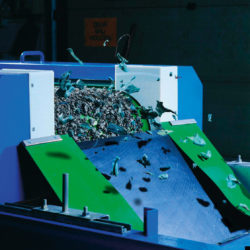 Metal consumer goods are the world record holders of the recycling economy. Refounding turns steel and aluminium scrap into high-quality secondary raw materials. Recycling has a positive impact on the environment and conserves natural raw material resources. The resource and energy efficient use of scrap in foundries and steel mills is a significant topic in metallurgical plant engineering. Exhibitors will present trends and developments at METEC and GIFA as well as NEWCAST and THERMPROCESS at the exhibition centre in Düsseldorf from June 25 to 29, 2019.

First the furnace, then a fresh start. Washing machines and cars, bicycles and beverage cans, rails and bridges of closed down railway lines – at the end of their life, they are all resurrected as consumer goods. In this rebirth by fire, steel and aluminium are separated by type. Melts in metal recycling companies, steel and aluminium mills and foundries transform scrap into a high-quality secondary raw material.

Metals, predominantly steel and aluminium are the number one enablers in an ecological recycling economy thanks to their multi-recycling characteristics. The period of time after which disused steel and aluminium products return to the material cycle varies widely. A beverage can is only in circulation for a few weeks, a car sometimes lasts twenty years and more. Whilst a steel bridge can still fulfil its function after a hundred years, more and more reinforced concrete bridges are slated for demolition after only 35 years. Meanwhile, the reinforced steel gained from the demolition can be fully recycled.

The recycling industry’s value chain consists of collection systems, dismantling companies, metal dealers and scrap processors. “The supply situation on the scrap markets is satisfying,” says Dr. Heinz-Jürgen Büchner, Managing Director Industrials & Automotive at IKB Deutsche Industriebank AG. For the time being, the trade dispute with the USA will not alter this fact. “Even before the punitive tariffs on steel and aluminium became effective, the domestic price level on the steel market in the USA was considerably lower than that of the world market as well as that of the EU,” says the IKB expert on raw materials. We can therefore expect imports to continue to be profitable despite a surcharge of 25% import duty on steel and 10% on aluminium. “In addition, American steel and aluminium processors have by and large passed on the price increases to the end customer,” adds Büchner.

However, Turkey – one of the most important purchasers of American steel scrap – has ordered less in the USA and more in Europe. “China has also taken to teasing and has left imported scrap in the Chinese ports of entry for an extremely long time as well as deliberately dealt with it slowly,” says Büchner.

On the German market for steel and iron scrap (fe scrap), IKB expert Büchner expects an amount of old and demolition scrap usual for this time of year. “Recently, the amount of new scrap was slightly less due to interruptions in production at a number of automotive manufacturers as well as their suppliers, caused by the transition to new test cycles. Nevertheless, the supply to European steel manufacturers and foundries is still secure,” says the IKB raw materials expert.

Steel scrap: This world champion in recycling has many strong points

Every steel object is also a recycling product. In every car, we can find steel that was a washing machine, a bicycle or a beverage can in a former life. Steel can be recycled time and time again without quality loss and is the most recycled material worldwide. In almost every country, there are steel mills that return scrapped steel products to the production process. “Without scrap, there is no steel. Scrap is an indispensable secondary raw material for the production of highly innovative steels,” says Andreas Schwenter, President of the BDSV (Federal Association of German Steel Recycling and Disposal Companies). Around 600 million tons of fe scrap were used worldwide in crude steel production in 2017. “Worldwide, no other secondary raw material is used in comparable amounts – tendency rising,” states Schwenter.

Particularly the mix of oxygen steel making and electric steel manufacturing is decisive for the demand of fe scrap in the steel industry. In oxygen steelmaking, crude steel is classically manufactured from ore and bituminous coal, with an average of around 200 kg scrap per ton of crude steel primarily used as scrap for cooling. In electric arc furnaces, on the other hand, steel is made entirely out of scrap or direct reduced iron (sponge iron, DRI or HBI). This process uses a total of at least 1.2 tons of scrap per ton of crude steel.  According to IKB, initial estimates suggest that around 70% of steel worldwide was produced using the blast furnace route (oxygen) in 2017. However, there are considerable regional differences: Whilst the share of oxygen steel in the EU is 60%, it is only around 34% in NAFTA and Turkey respectively. “In contrast, the share of oxygen steel in China has risen to approx. 90%,” explains Büchner.

In the mid-term, the share of electric steel is expected to pick up again, as Büchner observes. China, for example, is currently converting four oxygen steel works to the electric steelmaking process, with further works to follow. The reason Büchner states for this is that the country now has a considerable amount of scrap, which is estimated to increase to up to 300 million tons by 2030. “In addition, the foundries’ demand is also expected to increase,” adds Büchner.

In Germany, steel scrap is almost completely collected and subsequently recycled nationwide. This never ending story of multi-recycling, for example, turns one ton of steel into four tons of new steel products after 6 runs through recycling. The German steel industry alone uses more than 20 million tons of steel and iron scrap a year out of which to make new products. Electric steel mills are practically perfect recycling companies. Compared to the blast furnace route, electric steelmaking is more efficient with regard to energy, but is economically more expensive. Therefore, electric furnaces are primarily used to produce stainless steel made from various types of steel scrap. According to BMWi, one ton of steel made of iron ore requires around 20 gigajoules (5,600 kWh) energy. An electric steel mill requires about 450 kWh to produce one ton of liquid steel.

Large metal recycling companies such as TSR (Remondis Group) close the cycle from scrap processors to re-users for more and more materials. Recycling processes are continuously optimised and new processes are introduced. TSR, for example, develops solutions for specific metals such as aluminium with adhesions or metal compositions for which recycling thus far has neither been economic nor technically feasible.

The leading recycling companies for steel scrap are innovative technology companies with laboratories and analytical devices, presses and shredders, special scrap shears, chip breakers as well as briquetting, sandblasting and sorting plants. Interested parties can visit this innovative sector, for example the Cronimet recycling company. Located in Karlsruhe, Germany, the company specialises in stainless steels. Here, all types and alloys of stainless steel scrap are processed to pure secondary raw materials of highest grading and quality for customers in steel mills and foundries. Even metal sludge and drilling mud can be recycled. With a vacuum distillation plant in Bitterfeld-Wolfen, the experts in Karlsruhe run the first plant worldwide for processing oily and metalliferous muds and sludge. With a capacity of 20,000 tons per year, grinding emulsions, oils and other substances are separated from solid materials, such as metals.

Even finest dusts, such as those generated in steel production, do not belong on the dump. DK Recycling und Roheisen GmbH, located in Duisburg, Germany, is the world’s largest recycler of ferrous residuals in the steel industry. Instead of taking residuals from filter systems, for example, to the dump, they are processed in Duisburg. This company that, according to DK, is unique worldwide manages to turn what is basically waste into special pig iron at a high profitability and sustainability level.

Aluminium can also practically be recycled endlessly. The recycling rate of aluminium without quality loss in the most important areas of use lies between 95 and 100 percent. One driver for aluminium is lightweight construction, especially for cast parts in the automotive industry. “Whilst the worldwide production of cast iron materials has increased by a mere 50% since 1999, the output of aluminium casting has increased by a factor of more than two-and-a-half,” explains IKB analyst Büchner. As early as 2016, the global aluminium casting production has achieved a new production record of just under 18 million tons, tendency rising. According to Büchner, the cast iron sector will benefit from part of the expected growth caused by the increased use of aluminium in automotive manufacturing.

In the long term, demand for aluminium will increase. Currently however, the increase in new capacities for primary aluminium is quite small. This is why the expert Büchner assumes that there will only be a slight expansion of production opportunities in the next five years. However, additional growth is necessary in recycling aluminium production. “This indicates an accordingly higher demand for aluminium scrap,” concludes Büchner.

According to estimates by the International Aluminium Institute (IAI), in 2016 around 17 million tons of aluminium old scrap were accrued worldwide. This number will increase to around 21 million tons in 2020, according to IAI. This corresponds to a share of more than a third of today’s global output of primary aluminium. Today, around 20 percent of our aluminium demand worldwide is covered by old scrap. Besides old scrap, new scrap is also generated. Some examples are cutting scrap in the production of semi-finished goods, sprues from casting foundries and chips from the mechanical processing of semi-finished goods and products.

Recycled aluminium is produced in the form of casting and wrought alloys. With regard to quality, there is hardly any difference between alloys made of primary metal and those made of recycled aluminium.

For the aluminium cycle of reusable materials, scrap supply is the bottleneck. Aluminium products can last for a very long time. Aluminium windows, for example, can reach a lifespan of sometimes far more than 50 years. Around 75 percent of all aluminium that was ever produced is still in use today. Part of this has already run through several recycling processes, according to aluminium manufacturer Hydro.

With a production of around 700,000 tons, the German aluminium recycling industry is one of the leaders in Europe. In Germany, the production of aluminium made of used products has long since far exceeded production using primary aluminium. The recycling rate has reached around 95 percent both in the automotive field and the construction sector and over 80 percent in packaging. Throughout Europe, close to 95 percent of aluminium scrap is also recycled from vehicles.

Consequently, the recycling industry plays a significant role in aluminium’s life cycle. The amount of recycled metal is increasing and remelting plants have new and improved processes to reduce emissions caused by melting aluminium scrap. Aluminium companies such as Hydro continue to invest in the expansion of recycling capacities. To do this, they install state-of-the-art plant technology.