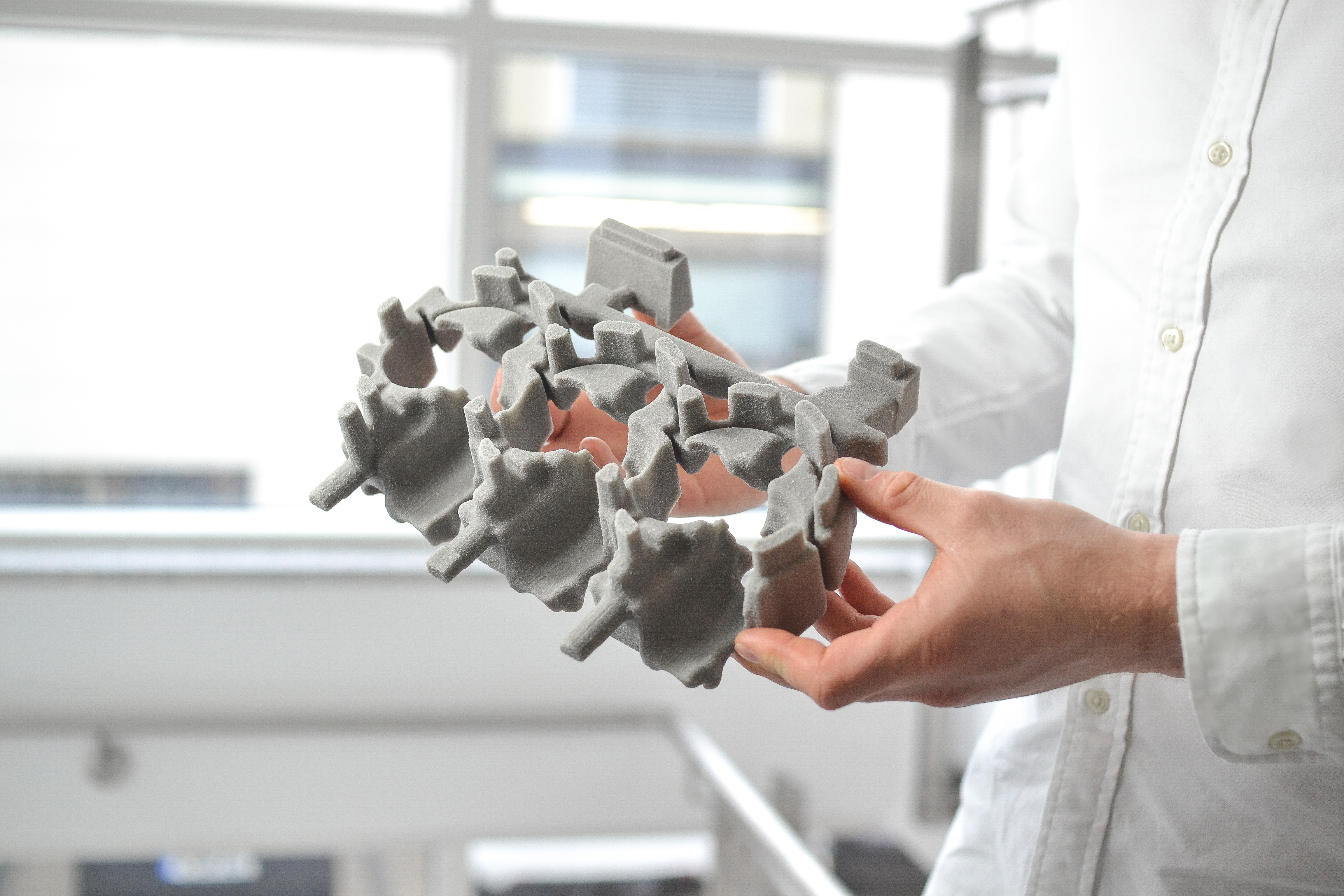 Other installations and procedures for additive manufacturing

One of voxeljet’s most compact 3D printing systems is the VX200. Thanks to its optimized dimensions this entry-level 3D printing system can easily be installed in smaller spaces. This is particularly beneficial for research and development. The VX200 prints small prototypes and design parts efficiently and is very easy to operate. Practical option: With voxeljet’s Open Source Program, various machine parameters can be individually adjusted to customize the printing process. This optimizes the interaction between printing system and material for 3D printing.

Benefits of the VX200
Flexible system: Ideal for individual research purposes or material sets.
Compact size: Perfect for industrial usage, even in small spaces.
Easy to operate: Thanks to fully automated production.
Tried and tested 3D printer: Fast, economic production of small molds and models.
Perfect starter option: 3D printing for universities, research laboratories, training and development institutions.
High resolution: A piezo print head system with a resolution of up to 360 dpi.
Rugged 3D printing system: The design of the VX200 makes it durable and low-maintenance.

The VX500 focuses primarily on simplifying the production  of prototypes and models. This tried and tested 3D printing system has been specially designed for these applications. The VX500 features ll high-performance modules  within a compact design. Industrial environments in particular can benefit from the integrated material handling, multi-jet print head or practical jobbox replacement system. Its quick and easy operation makes the 3D printing system the perfect partner for efficient, economical production – both for individual parts and for small and medium sized series.

Benefits of the VX500
Easy to operate: A well thought through ergonomic concept.
Tried and tested 3D printer: Fast, economic production of small molds and cores.
Precise resolution: Depending on the material and configuration, a resolution of up to 600 dpi is possible.
Detailed models: Either made of ceramics, plastic or sand with a high-quality surface and up to 500 mm in length.
Great features in a compact design: Also suitable for small spaces.
Save resources: Depending on the material and configuration, residual material can be reused.

Universal 3D printing system and international bestseller: the VX1000 is the productive all-rounder for industrial applications. From the cost-effective production of medium sized molds, to cores, models and prototypes – this 3D printing system can meet a wide range of complex demands. The VX1000 is also suitable for small series production. Uninterrupted printing processes ensure a high production capability. The VX1000 makes 3D printing with ceramic, plastic and sand even more flexible and easier to optimize.

Benefits of the VX1000
Sophisticated ergonomics concept for particularly comfortable operation.
Universal 3D printing system for fast, economical production of medium-sized molds, cores and small series of parts.
Precise details: Plastic models and sand or ceramic molds with high surface quality and up to 1,000 mm length.
High resolution of up to 600 dpi.
Perfect for research purposes, investment and sand casting.
Economical and environmentally friendly: Depending on the configuration, unprinted material can be reused.
Twice as economical: The rugged design is particularly durable.

voxeljet AG Successfully Completed Follow-on Offering at the NYSE
On November 1, 2018 voxeljet AG announced the closing of its public offering of 5,580,000 American Depositary Shares (“ADSs”) at a public offering price of $2.57 per ADS. The net proceeds of the offering to the Company were approximately $12.7 million after deducting underwriting discounts, commissions and estimated offering expenses.

voxeljet and Sogeclair Aerospace Project wins “Best industrial project with 3D printing”
SOGECLAIR Aerospace has succeeded in reducing the weight of an aircraft door by 30 % with an unique printed concept. This was made possible by the cooperation with voxeljet. Thanks to bionic structures, the topology-optimised door offers the same strength as conventionally-manufactured doors. To ensure that the door can be cast as a single piece of aluminium, voxeljet printed the model using their proven PMMA material.  No alternative additive manufacturing technology could have realized the door design in one piece. At this year's 3DPrint exhibition in Lyon, the project won first place in the category "Best industrial project with 3D printing".

TEI and voxeljet sign volume contract
voxeljet has signed a volume contract with the American foundry expert Tooling and Equipment International (TEI). TEI has agreed in the contract to source a volume of more than 500,000 litres of 3D printed sand from voxeljet America Inc. over a three-year period. As part of the contract, voxeljet will increase its capacity and install a second VX4000 in its service centre.

First VX1000 with phenolic binder process installed in North America
Danko Arlington, Inc., state-of-the-art foundry based in Baltimore, MD, installed the first VX1000 PDB (Phenolic Direct Binding) system for printed sand moulds and cores in North America. With PDB, a process is gaining a foothold in the United States which is a unique addition to conventional sand casting due to increased mould strength, lower gas burst and reusability of unprinted sand.